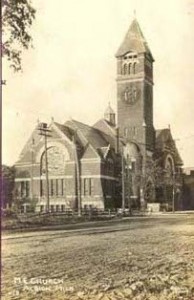 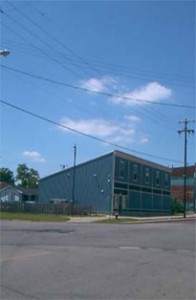 One of Albion’s saddest days is when the Methodist Church decided to move from this site to a new building (Goodrich Chapel) constructed on the Albion College campus. A few years after moving in 1958 the Old Methodist Church at 116 E. Erie St was demolished. Today an auto repair garage rests in its place.

The Methodist Church that stood here was constructed under the leadership of Rev. Washington Gardner in 1888. At that time Gardner was a Civil War veteran and later he went on to become a US Senator and National Commandment of the Grand Army of the Republic. Washington Gardner High School was named in his honor just before his death in 1927. The church building that Gardner helped to construct in 1888 became site of lectures, celebrations, and religious services. The tower at the corner of Erie and Ionia Street, a round arched entrance, and two rose windows made a powerful exterior. Inside they say the tiered seats and round arched balcony were designed specifically for the oratorical style of Washington Gardner. Here Albion College commencement was held and many prominent people from throughout the United States came to speak including Helen Keller among others. 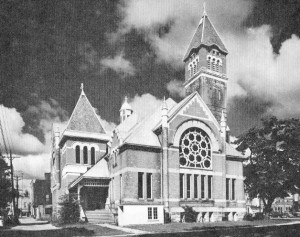 This downtown church was one of five denominational churches located in the downtown area during the 19th century and through the first decades of the 20th century. While the other four churches are still standing, only the Episcopal and Presbyterian remained in their original buildings. Moving of the Methodist congregation from downtown to the college campus was a setback. Demolition of the old church building was a setback for the congregation, downtown, and for Albion. The auto repair garage that sits on the site hardly compensates for the landmark building that was lost. Albion is fortunate to have a rich history and an abundance of historic buildings to prove it. Unfortunately, little is being done to protect these buildings from the twin ravages of time and weather. The only real protection for historic properties comes at the local level in the form of a historic district commission. Calhoun County, of which Albion is located in, produced the Calhoun County Historic Preservation Plan in 1975. In the City of Albion.   It was completed in 1976 did recommend creating such a commission, and identified several buildings deserving to be protected. Unfortunately, no action was taken at that time. This identified far more historic buildings in the Albion area. Unfortunately, no action was taken to protect these buildings either. Albion is fortunate to have a number of properties listed on the National Register of Historic Places and also on the State Register. This designation is purely honorary and has no impact on what may or may not be done with these properties. Copyright © 1998-2011, Isaac D. Kremer 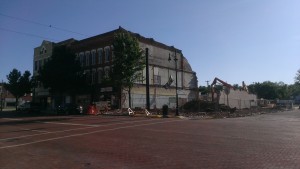