This is the church of the first Methodist congregation in Michigan.  Indeed, I believe this is the oldest Protestant congregation in Michigan.  It waqs founded in 1810.  The British took control of Detroit from the French in autumn 1860 but there were few English setters.  Primarily, Detroit was a lightly fortified military outpost with, typically, fewer than 100 British soldiers.  Between 1760 and 1796 when the American replaced the British, no Church of England parish was establisherd in Detroit.  Territorial Governor Lewis Cass approved the charter for Centraol Methodist in 1822, less than a   century after John Wesley founded the Methodist reform movement in Savannah.   In the early 1860s, this congregation had to make a decision about building   a new church since their wooden structure at Woodward and State was razed by   fire. 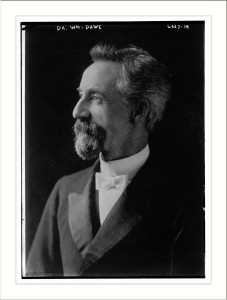 They selected Gordon Lloyd as their architect,    an architect  whose imprint in Detroit is still large because of the churches    he built. Lloyd   was born in England but raised in Sherbrooke, Quebec and then returned to England     for his training. He traveled extensively in northern Europe, developing    an appreciation   of northern Gothic cathedrals before migrating to Detroit in 1858 where he quickly won commissions. Not far from Central Methodist is Christ Church on East Jefferson, a structure Lloyd designed just before designing the church you see pictured here. Lloyd eventually designed about three dozen church throughout the Midwest including the very attractive St. James Episcopal on Grosse Ile

Episcopalian congregations at this time had    fixed ideas about  the structure of a church, but Methodists were more flexible,    so Lloyd could   be imaginative when he designed this beautiful structure. He specialized in     Gothic structures, so he built a light gray, rock-faced limestone church    with   dark stone trim. If you walk around this church and examine it, you will see     the skills of Gordon Lloyd illustrate themselves almost a century and a    half   after he completed the building. You might note the impressive clock in the tower of the church. It has been in operation since 1867. You might also compare this Gothic church    to  the Gothic-influenced Fyfe Shoe Building directly    across Woodward. The original   stained glass windows in Central Methodist were imported from England, but    they deteriorated so the congregation, in 1955, commissioned the Willet Studios    of   Philadelphia to replace the windows with new stained glass resembling windows     found in the Gothic cathedrals of medieval England and France. All of the    windows   focus upon the life and teachings of Christ applied to contemporary issue,    so the Statue of Liberty and the United Nations Building are included in    the    stained   glass windows.

In 1936, Woodward Avenue was widened and the length of the   church was cut by 28 feet. The steeple was moved 26 feet to the east. That is, the church was reduced in size and the steeple moved back from what had been Woodward.

The six story parish house to the east of the church was designed by Smith, Hyinchyman and Grylls and completed at the time of World War I. In the early years of this new century, the leaders of this church announced plans to construct a residential building on property adjoining the church that they owned. Presumably, this will be an investment property for the parish as they seek to capitalize upon the increasing popularity of living in downtown Detroit.

Very informative pictures of this church are presented in the 2012 book cited below.